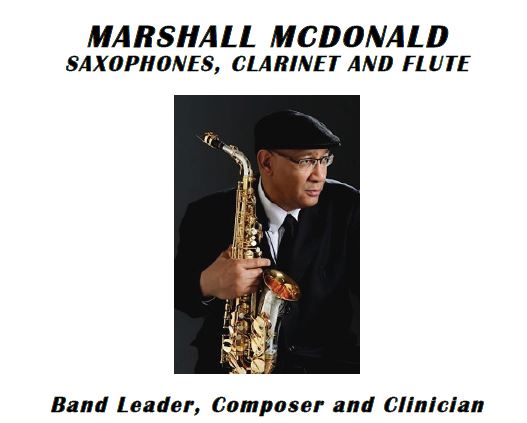 Whether you’ve heard him playing Lead alto with Count Basie Orchestra in venues all over the world, or playing tenor saxophone with Paquito D’Rivera or baritone saxophone with Abdullah Ibrahim or clarinet solos with The Duke Elington Orchestra, Marshall McDonald upholds the traditions of Jazz Music created by the jazz masters. A seasoned reedman, having played 30 years in the New York City area, he is well known for his ability to play all of the saxophones and woodwinds.

Marshall was offered the baritone saxophone chair with the great Lionel Hampton in 1991, a position he quickly accepted and toured the world with Lionel, playing jazz festivals and concerts in The United States, Europe, Canada, South America and Asia. Mr. Hampton eventually asked Marshall to play both tenor sax, alto sax and clarinet solos in the band and featured him on clarinet in a small group on a TV appearance on The Conan O’Brien Show. Marshall stayed with Lionel for 10 years, also playing at his memorial at Riverside Church in 2002, with guests George H. Bush, Charlie Rangel and Wynston Marsalis.

“Marshall has that pure clarinet sound. He has that sound like the symphony guys!” — Lionel Hampton

Marshall performed a concert with The Sonny Constanzo Big Band where the guest artist was none other than Paquito D’Rivera. Mr.D’Rivera, leader of Dizzy Gillespie’s “United Nation Orchestra” quickly hired Marshall to play saxophone in the band. He was also asked to play alto sax with The Illinois Jacquet Big Band, lead alto with The Charli Persip Big Band, tenor saxophone with The Bobby Caldwell Band in New York City, and alto saxophone with The Chico O’Farrill Orchestra. His tenure with Mr. O’Farrill led to his infamous close up in the Pierce Brosnan movie, The Thomas Crown Affair, and participation in the historic jazz documentary, Calle 54. The great Frank Foster asked Marshall to play Lead Alto in his “Loud Minority Big Band”, in fact Mr. Foster, also asked Marshall in 1994 to sub on tenor sax in the Basie Band for Mr. Kenny Hing which began his long relationship with the band. In addition, Marshall has played with The Jimmy Dorsey Orchestra, The George Gee Orchestra, and The Cab Calloway Orchestra.

Marshall began by studying clarinet at age 9, with his first years of training on classical clarinet with Principal Clarinetist Thomas Thompson of The Pittsburgh Symphony at Carnegie-Mellon University, continuing with William Balawadjer of Carnegie-Mellon University for 6 years and for 2
years with Paris Conservatory graduate Nestor Koval at Duquesne University. At age 11, Marshall was performing the Mozart Clarinet Concerto. Before High School at age 12, he started studying alto saxophone and flute, in order to join the Jazz Band.

“Marshall has always done a GREAT job in my band!” –- Charli Persip

While at Fox Chapel High School in Pittsburgh, Marshall was Band President, first clarinet in the State bands, and an Honors Roll member. Marshall attended University of Pittsburgh as a Jazz Major, under the tutelage of Dr. Nathan Davis, playing Lead Alto in the Pitt Jazz Band, and
started studies of all the saxophones. Marshall’s advanced skills earned him an Undergraduate Teaching Assistant position his 3rd semester, and the great Geri Allen was in the Graduate Program at the same time, and served as his mentor. 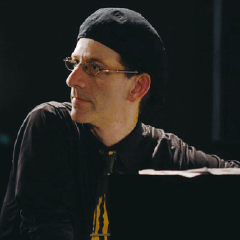